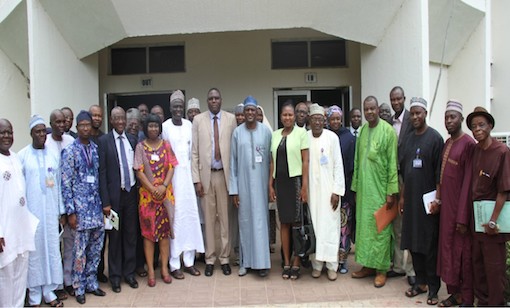 Welcome to WordPress. This is your first post. Edit or delete it, then start writing!

The West African Science Service Centre on Climate Change and Adapted Land Use (WASCAL), Federal University of Technology, Minna has been given the go-ahead to commence adoctoral programme.

Executive Director of WASCAL, Dr. Moumini Savadogo who was on a visit to the University on Wednesday, August 1, 2018 disclosed this when he met with FUT, Minna Principal Officers as well as the Advisory and Academic Board Members of WASCAL, at the Senate Chamber, Gidan Kwano Campus.

Dr. Savadogo said they are proud of the excellent work FUT, Minna is doing, hence the decision to upgrade its Masters Research Programme (MRP) on Climate Change and Adapted Land Use to a PhD.

He added that the theme of the PhD programme to be offered in the University will be Climate Change and Human Habitat.

The Executive Director lauded FUT, Minna for the quality of its training, saying that most graduates of its WASCAL programme are either employed or enrolled in PhD programmes.

WASCAL, he said, was established in response to climate change as it became necessary to develop strategies and methods to cope with the challenge.

Dr. Savadogo added that the beauty of WASCAL is in its great contribution to regional integration.

A total of 195 students have graduated from its programmes across the sub-region, 99 and 96 at the masters’ doctoral levels respectively, he further disclosed.

He thanked the University for its excellent collaboration with the sub-regional centre and looked forward to more collaborations.

In his remarks, the Vice-Chancellor of the institution, Prof. Abdullahi Bala, fsssn, expressed happiness with the WASCAL project which he said has added colour, glamour and quality to the postgraduate programmes of the University. He described the MRP as truly international and timely as internationalisation is a topical issue for universities.

Prof. Bala noted that WASCAL is touching on germane issues and assured that the University would continue to support the programme.

The Vice-Chancellor commended the Director of WASCAL in FUT, Minna, Prof. Apollonia Okhimamhe for her doggedness and self-denial that led to the success of WASCAL.
Earlier, Prof. Okhimamhe did a PowerPoint presentation on the development and progress of WASCAL in the University.

The WASCAL officials were taken on a tour of WASCAL facility at FUT, Minna main campus. Dr. Savadogo was accompanied to the University by the WASCAL’s Director, Capacity Building Department, Prof. Janet Adelegan and the Deputy Director of WASCAL at the Federal University of Technology, Akure, Dr. Vincent Ajayi. He commended the University for the facilities provided at the Centre.

WASCAL, a German government-backed initiative in the sub-region, with headquarters in Accra, Ghana, is currently training students in 10 universities across West Africa.